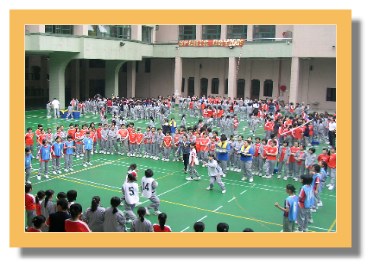 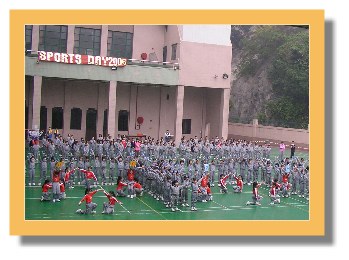 The Sports Day had originally been scheduled for the 23rd and 24th of March, but due to unpredictable weather, on-the-spot changes to the schedules had to be made.

The weather finally cleared on Tuesday, the 28th so immediate adjustments were made to the original sports day schedule. The students were informed that the bronze medal matches would commence after recess and the cheering competition would be held that afternoon. Being adaptable as always, the students easily adjusted to the new schedule. The bronze medal inter-class matches were held until lunch break. At the cheering competition that afternoon, the different levels impressed the judges and spectators with their unique performances that included an adaptation of kendo, a fan-dance, an American-influenced rendition of a pompom-bearing cheerleading squad, a mini cross-cultural string quintet accompanying a pair of artistic cyclists, and a marching field demonstration accompanied by a drum line. The day ended with everyone in high spirits, filled with eagerness for the matches scheduled for the following day.

On Wednesday, the 29th, the Primary students resumed regular classes in the morning while the Secondary students continued with the gold medal matches in the various events. After all the inter-class matches had been completed, the teachers and the students had a series of friendly matches which everyone enjoyed tremendously. The awarding ceremony followed and the students were dismissed and given the afternoon off.

The Sports Day this year proved to be another classic example of how well the administration, sister, staff members and students cooperate with one another.